The cryptocurrency market is on the up again. Its overall cap now stands at $2.64 trillion, a 1.7% rise over the past 24 hours, and a new all-time high. Bitcoin (BTC) remains the leader of this charge, with the original cryptocurrency rising by 3.4% in single day. But while it’s closing in on its own ATH, some traders may feel priced out of the action. However, a number of fundamentally sound altcoins are still available at discounted prices. As such, we’ve put together a list of the 5 best new cryptocurrency to buy now. This covers coins that are around a year old or less.

Despite being on the rise, DOT’s relative strength index (in purple above) shows that it still isn’t overbought. At the same time, its 30-day moving average (in red) is comfortably above its 200-day average, indicating its current momentum.

The reason for DOT’s recent good fortune is simple: parachain auctions. The network’s governance structure last week voted in favour of holding such auctions, which will decide which projects get to populate Polkadot’s ecosystem. Now, all that’s needed is for the motion to be voted for by its community.

Assuming that Polkadot’s public does vote through the auction timetable (which it most certainly will), auctions will begin on November 11. Needless to say, once parachains are launched on Polkadot, demand for DOT itself will increase significantly. That’s largely because it’s used to bond new parachains to Polkadot’s central relay chain. And also because it’s used for staking and governance, as well as for paying transaction fees.

Referendum 39 is currently up for a community vote, if passed it will schedule the first auction to take place on November 11, 2021 [a little over 26 days]. Reminder for those wishing to take part in auctions, the unbonding period on Polkadot is 28 days.https://t.co/h9E4gNR60M 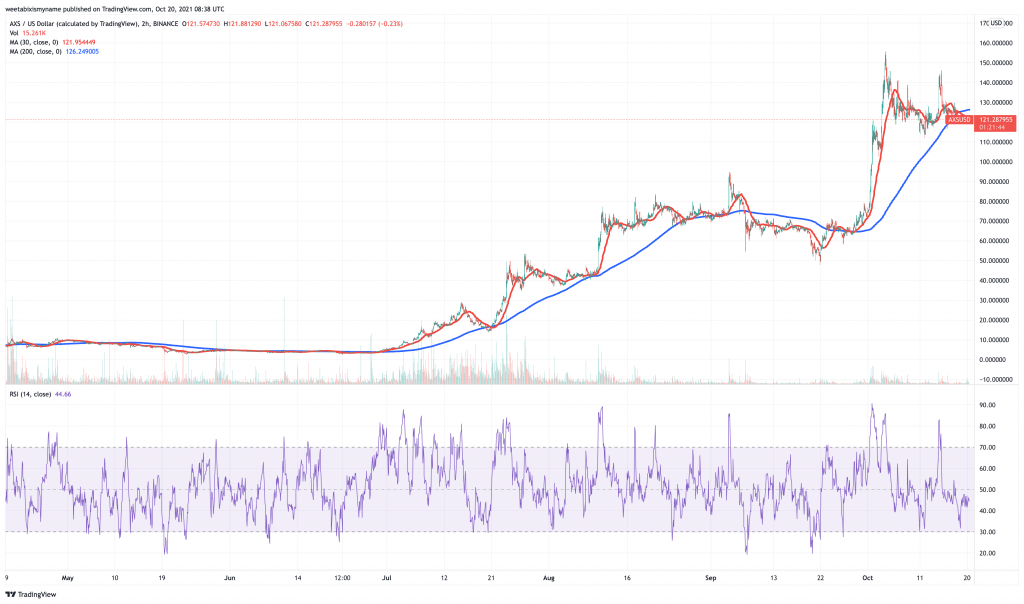 AXS is nearing ‘oversold’ territory as far as its RSI is concerned, indicating a good time to enter its market. Its 30-day average has also dipped below its 200-day average, signalling a bottom that could be capitalised upon.

Irrespective of its recent correction, AXS remains fundamentally compelling. As the native token of the very popular Axie Infinity NFT-based game, it will continue to encounter high demand. Indeed,

Impressively, the NFT-based game passed $2 billion in total transaction volume to date at the end of last month, as well as $10 million daily volume. Its token went public only as recently as November 2020.

Axie Infinity also claims 2.25 million daily active users, having stood at only 61,125 at the end of May. This equals over 3,000% growth in under five months, as well as 11% growth since the start of October.

Investors are paying attention to such impressive stats. Also in October, Andreessen Horowitz led a $150m Series B funding round for the game’s developer (Sky Mavis) that valued the firm at $3 billion. This is why AXS is one of the 5 best new cryptocurrency to buy now.

Crypto scoop: NFT game Axie Infinity valued at $3 billion in a new round led by Andreessen Horowitz. The valuation reflects the *tremendous* growth in sales on the multiplayer NFT game. https://t.co/MJkxc5CsQ6 w/@hgmiller29 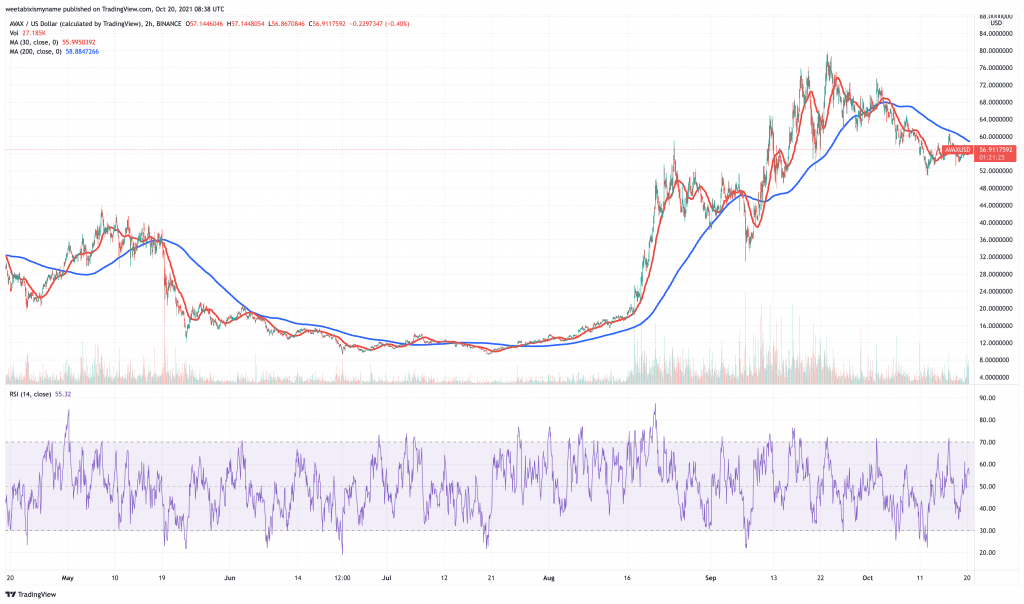 AVAX’s technical indicators signal a good time to invest. Its RSI is remains under 60, suggesting plenty of room to enter its market. Likewise, its 30-day average has just begun rising, indicating that it may soon overtake its 200-day average yet again and commence a new upsurge.

It’s also worth remembering that Avalanche now has big money behind it. In mid-September, Polychain and Three Arrows Capital invested $230 million in the platform, which will now be more able to developer further. Combined with the fact that Avalanche burns the AVAX taken in transaction fees, such investment shows why it’s one of the best new cryptocurrency to buy now.

📢 BIG News 📢@Polychaincap and Three Arrows Capital led a $230M investment in the #Avalanche ecosystem to support growth of the platform.https://t.co/T141NFEoIG 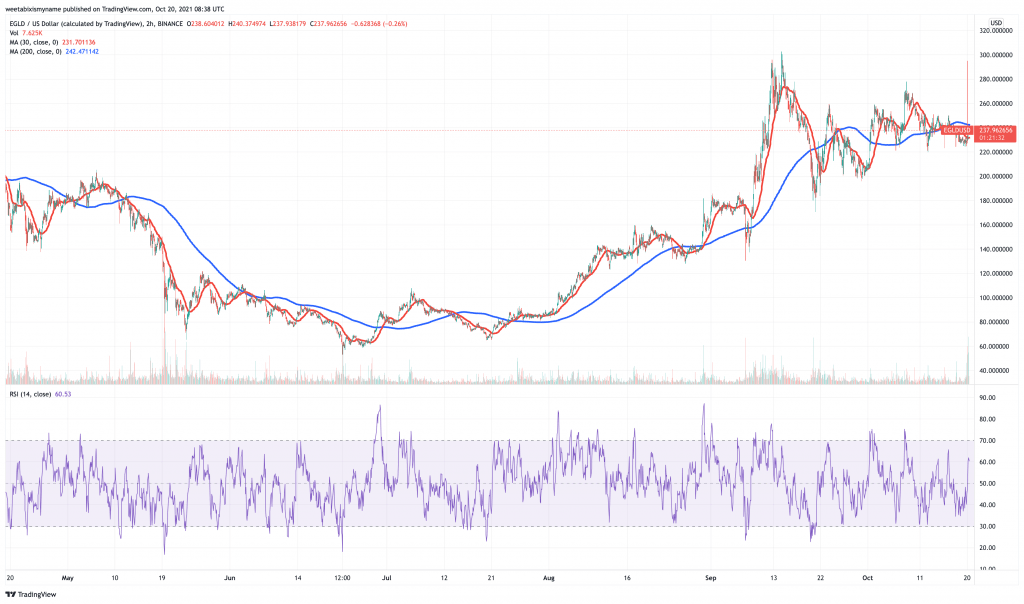 EGLD is another altcoin whose indicators suggest a good time to buy. Its 30-day average is below its 200-day, indicating a bottom. Meanwhile, its RSI sits at around 60, indicating a healthy level of momentum without overheating.

Open to the public market since September 2020, EGLD is the native token of Elrond, another blockchain aiming to provide an internet-scale blockchain. Within Elrond, EGLD is used for network fees, staking and rewarding validators. The maximum supply of EGLD can never pass 31,415,926, something which could make it deflationary, assuming rising and high demand. 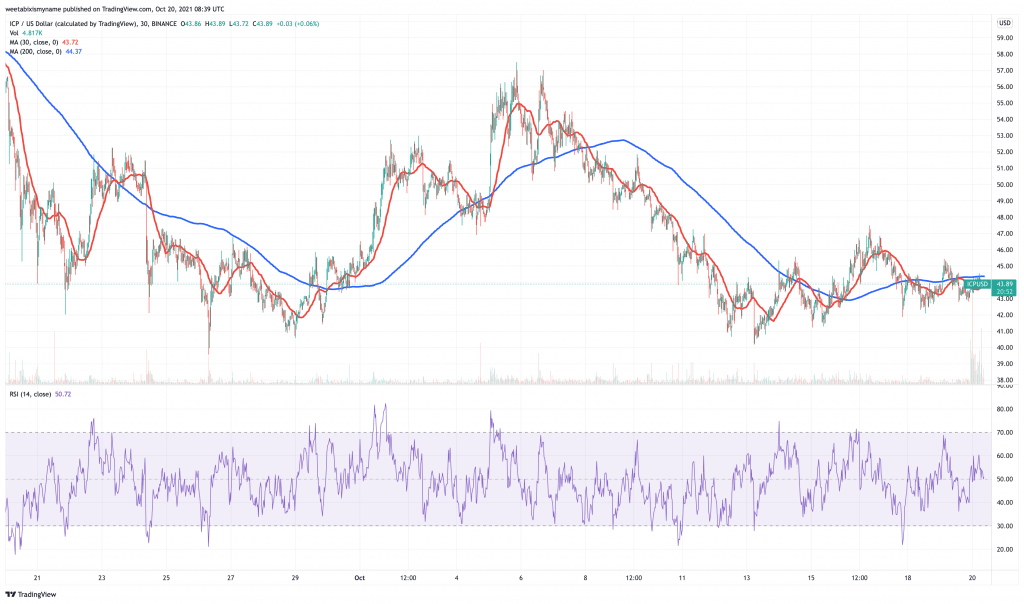 As far as technical indicators go, ICP’s 30-day average is below its 200-day. This hints that it may be at the bottom of a recent downturn, and near the beginning of an upturn. On top of this, its RSI (of about 50) suggests there’s plenty of room to buy up ICP before it becomes overbought.

ICP rode an upwards wave earlier this month after Facebook went down. By going offline for around six hours (along with Instagram, Messenger and WhatsApp), the social network highlighted the need for an end-to-end decentralised internet. And while ICP’s rally following the outage has subsided (for now), the need for something like the Internet Computer remains.

Encouragingly, Internet Computer has continued to expand its network and highlight its potential. This week, it commemorated having generated 264 million blocks since its launch in May. To put this in some perspective, Bitcoin has produced only 705,839 blocks, and it has been operating since January 2009. This suggests some might impressive speed, and shows why ICP is one of our 5 best new cryptocurrency to buy now.

📈This week, the #InternetComputer surpassed 264M blocks generated since Genesis.📈

The block count metric speaks to both the speed and capacity of the #InternetComputer.

Investors using Ethereum as a safe haven against Bitcoin’s crash

How To Convert Bitcoin (BTC) To Monero(XMR)? [Safely]

It looks like you have got to know about the secret of changing Bitcoin into Monero for disappearing in cyberspace with your money. For those of...

How To Convert Monero (XMR) To Bitcoin (BTC) From Cryptmixer

Cryptmixer is the first cryptocurrency and altcoin exchange aggregator. We have integrated many leading exchanges across the globe to provide best exchange rates to our...

I regret to inform you Bitcoin transactions are far from being anonymous. If this news was not a surprise to you, you’ve most likely used...

How To Instantly Convert Bitcoin (BTC) To Ethereum Classic(ETC)? [Safely]

It looks like you have got to know about the secret of changing Bitcoin into ETC for disappearing in cyberspace with your money. For those of...

How To Instantly Convert Ethereum (ETH) To Dash(DASH)? [Safely]

It looks like you have got to know about the secret of changing Ethereum into DASH for disappearing in cyberspace with your money. For those of...

How To Instantly Convert Ethereum (ETH) To Dai(DAI)? [Safely]

It looks like you have got to know about the secret of changing Ethereum into DAI for disappearing in cyberspace with your money. For those of...

You may have missed

Crypto Conference DeFiCon 2021 to Be Hosted on December 18-19 in Brooklyn, NYC